Deep Kumar, a 27-year-old- normally active sales executive, started feeling pain in his right hip recently. Though the pain episodes were not frequent, they were severe enough to disturb his daily routine. He was clueless about the possible cause of pain as he did not remember having any accidents in the recent past.

As time progressed, his pain intensity increased. Worried about the situation, he consulted an orthopedic surgeon. Along with physical examination, the doctor asked for his medical history. He was taking steroids for a chronic skin infection. The doctor advised him to take the X-ray of his right hip. As the doctor suspected, he had Avascular Necrosis (AVN) in the right hip.

In AVN, bone cells namely osteoblasts die and are not naturally replaced resulting in loss of bone. It occurs when blood supply to the bone is temporarily lost or reduced (figure 1). In the absence of oxygen, bone cells die. It can be thought of as a bone attack, similar to a heart attack when heart cells die in absence of oxygen. 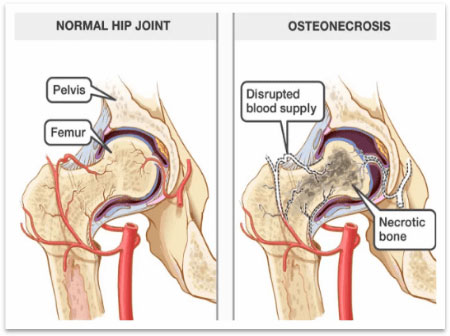 Deep was disturbed by the diagnosis of AVN and thought about how he caught such a disease at a young age. The doctor explained the disease and concluded that in his case; probably the steroid use was the reason for development of AVN. Use of steroids for longer duration in his case could have resulted in the hip joint destruction which resulted as severe pain in the right hip joint. But the good news was that the disease was at a very initial stage.

He started with medication for pain relief. However, the doctor recommended surgery that could possibly stop disease progression. All possible treatment options in his case which included core decompression (CD) and core decompression along with use of biological agents were explained to him. Now the challenge was how to choose the treatment, and which would be more precise to give him long term pain relief. His age was a very crucial factor in the treatment decision.

Deep was recommended OSSGROW®, a Bone cell Therapy which involves using patients own bone cells as a tool to cure the disease.

Bone cell therapy is a personalized, natural and minimal invasive treatment. The therapy procedure was explained as below -

What does research say?

AVN is common in young adults. Hip replacement surgery at a young age poses a huge burden on the patient as the procedure may have to be repeated during the patient's lifespan. Thus, the alternative treatments which are more feasible and natural are required for cure of AVN. Bone cell therapy, in such instances is highly beneficial. It not only cures but stops the progression of the disease too. Bone cell therapy is a permanent as well as natural cure for the condition. It is highly beneficial particularly in younger patients considering the long durable results. The treatment is best suited considering its minimal invasive nature.